The components of the projected passive 3D home-theatre system

A device that has a HDMI output and is capable of playing Blu-ray content. This may be a conventional desktop Blu-ray player which reads the movie-file from an optical disc, or a media-player that has the capacity to process files from a hard disc or network storage device, copied from a Blu-ray disc (e.g. BD 3D ISO). From the point of view of output there is no difference between the two devices, both of them may be capable of HDMI transmission of the image material of Blu-ray discs and the HD audio format, in the above mentioned frame packed format and even with 7.1 audio. Of course, we can project both side-by-side and top-bottom format 3D movies, since the projector is compatible with these as well, thus we may not even necessarily need a 3D capable player. However, on the large size screen it may be quite visible if instead of the full HD’s 1920 pixel-columns there are only 960, or instead of 1080 pixel-rows there are only 540. Therefore, even though the quality degradation of such halved resolution movies may not be spectacular to everyone on a smaller screen TV, on a several meters tall screen generally everyone perceives that the quality (resolution) is significantly lower compared to full HD.

In the ideal case, the 3D content and (HD) audio, derived from the player and transmitted through HDMI, first arrives into a home-theatre amplifier. This device is fundamentally only “interested” in the HDMI cable’s audio transmitting wires, its task is the processing (decoding), then the amplification of audio formats used on Blu-ray discs, so the speakers can be used. The more popular main audio formats are LPCM, Dolby Digital, Dolby Digital Plus, Dolby TrueHD, DTS, DTS-HD (Master Audio). All newer HDMI amplifiers are compatible with all of these. The earlier models that were the first ones to have HDMI inputs were generally only capable of displaying the HDMI source output image in the format that had been selected, and they were only able to receive digital audio via optical or coax input, not via HDMI. Meaning that they operated as a kind of HDMI switch from the image’s point of view. However, the majority of these don’t have HDMI 1.4 compatible electronics, thus they are unable to connect to 3D video signals. In this case, the player has to be directly connected to the projector by an HDMI cable, only the digital optical/coax audio output is connected to the amplifier from the player. In this case we don’t have the option of enjoying sound-tracks that contain more than 5.1 audio. Even if an older model HDMI amplifier is 7.1, it’s only capable of receiving 8 channels through its analog input, since the bandwidth of optical/coax cables is not enough for the transmission of more than 6 channels. Similarly, the HD (24 bit) multiple channel audio formats (Dolby Digital Plus, Dolby TrueHD, DTS-HD) can also only be transmitted via HDMI 1.3 and HDMI 1.4 cables, thus those amplifiers that don’t support these formats (don’t have at least HDMI 1.3 inputs) can’t provide high definition sound with 5.1 or 7.1.

However, current AV-amplifiers and Receivers (amplifiers also containing a radio) receive both their audio and video to be processed, from HDMI 1.4 inputs. Some of them are even capable of “managing” the image as well, therefore it’s not only on the player and the projector, (moreover, on a video processor, see below), rather also on the amplifier that we can adjust contrast, brightness, saturation and even more parameters (including even scaling up to full HD).

From the HDMI signal originating from the player our amplifier has processed the audio, and transmits the image intact, or possibly adjusting some parameters of it, but absolutely leaving it in 3D format (fundamentally frame packed). To be able to project with two projectors simultaneously for both eyes, the picture frames intended for the left and right eye, arriving one after the other in the data stream, have to be separated and as the end result, we need two, not frame packed format, practically “conventional” 2D video signals. This task is currently performed by a separate device, a 3D processor. It may have one or more inputs (e.g. DVI, HDMI, DisplayPort), which should support as many 3D formats as possible, not only Blu-ray 3D. It has two outputs (fundamentally HDMI), which we can directly connect to our two identical projectors. We offer GeoBox processors, made in Taiwan – currently two models – for passive home-theatres, for details see the products’ data sheets!

The images already separated for our two eyes are projected by two home-theater projectors of our choice, which are suitable for us and are preferably identical models. These of course don’t need to support any 3D format, since we are going to use them in 2D format, but they may support active 3D as well, but this will be unnecessary because of our considerably better passive method. Choose the types which by themselves provide sufficient brightness and resolution. When the two of them function in 3D mode, we can rest assured that – contrary to active 3D – this sufficient resolution and brightness will not be reduced, rather they will be significantly enhanced! Because of the size of the projected picture we absolutely recommend full HD resolution, but if we only have the option of expanding our existing 720p (HD-ready) projector with another such projector, the system will of course still function, full HD resolution isn’t a requirement for any of its components. For the projectors to be of the identical model isn’t a requirement either, but it’s very strongly recommended to choose at least identical brands, with identical brightness and resolution. In the case of divergent projectors, the different brightness, different color formation, contrast etc. may negatively influence the 3D image. 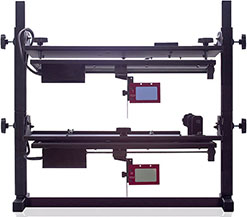 It’s best to operate the two projectors as close to each other as possible, so the geometry of the image will not be divergent or only minimally so. It’s important to project the pictures, intended for the two eyes, over each other as much as possible. If they are horizontally uneven that will not cause a significant problem, only the depth of the image will change slightly, and it doesn’t mean a particular effort for our brain. Vertically even a several centimeter difference will disappear as soon as we start watching the picture through our glasses, since our brain is rather tolerant. Irrespective of this we should adjust the areas projected by the two projectors as much as we can to match each other, but there is no need to worry about the two images to be projected onto each other to pixel accuracy, and this would be practically impossible anyhow, because of the two light sources positioned in different spots.

The geometry and location of the projected picture can be adjusted to varying degrees in the case of individual projectors. To ensure that even projectors providing the least control can project sufficiently overlapping images, it’s worth using a special, finely adjustable stand supporting two projectors, just as the method developed by us. The stand can be mounted on the ceiling or it may also be placed on the floor, as installation options require. The selected video processor can be attached to its bottom, thus we don’t need two long and generally expensive HDMI cables from our video processor, installed between the hi-fi equipment, to the projectors, the processor can operate on the projector stand. Since it’s certain that we will not wish to watch movies only in 3D every time, we also have to make it possible to be able to remove the filters placed in front of the two projectors (see below), from the optics at any time and then refit them into exactly the proper place. For this a rail-mobile system has been installed into our stand, for which an optional remote controlled motor can also be ordered.

The filters distributed by us originate from one of the most reputed manufacturers, the American Omega Optical. Two separate sizes can be selected, depending on the size required by the optics of our projector and the projecting distance. The smaller, 55×35 mm glass surface, filters are suitable for most projectors, but for projectors equipped with larger optics 70×45 mm filters are also available. Beside size, the filters should be selected based on the projector’s operational principle. Different filters are needed for LCD and DLP projectors, therefore we offer a total of two types of filters, both in two sizes.

Naturally, the lenses of our passive glasses are also made by Omega Optical, so they are easy to clean and durable. The special design of the glasses ensures that as little light will enter our eyes from our surroundings as possible, so we will only see the projected image. In this way we can feel even more like we are in the middle of the action, and the reflection of our eyes from the inner side of the lenses can be reduced to a minimum.