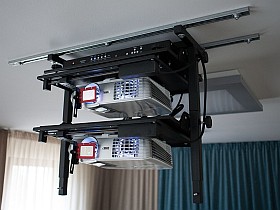 In the course of projection with two projectors – unless the projectors are specially built in combination by the manufacturer – one of the first tasks to be performed is the positioning of the two projectors. In an ideal case, the lenses of the two projectors should be positioned as close to each other as possible, since this is how it’s easiest to create identical size, identical geometry images. Thus, it’s expedient to place them under each other, and to suspend the pair from the ceiling, or to place them on e.g. a table, at approximately the height of the screen’s bottom edge.

The NEON 3DS-X2 offered by us can be used in both configurations, meaning that it makes the stable mounting and precision adjustment of the two projectors possible in both standing and suspended position, furthermore with the optional NEON 3DS-PS support console the video processor can also be placed next to them. We can fix our two projectors to a tray each, fastening them with screws from the bottom. One of the two trays isn’t only inclinable and adjustable in height, the projector on it can practically be revolved very finely without increments as well. All of this guarantees that we can sufficiently fit the projected images of simpler projectors over each other, in the case of which picture geometry is only adjustable in a very limited manner.

The positioning of spectrum-filters adjustable to the projector type is performed by, an optionally manual or motor-driven, movable mechanical system. We can fix both our smaller and larger size filters with two screws, we can adjust their height to the projector’s optics. If we don’t wish to watch 3D, it’s advisable to remove the filters from in front of the optics – especially if we would like to watch a movie with only one projector, not two, since in this case we shouldn’t reduce the brightness or discolor the image with the filter, which isn’t compensated by the filter’s pair in front of the other projector. In the case of the NEON 3DS-MF filter holder, the filter holder car can be manually moved on a rail, while the NEON 3DS-AF performs the same for us by the push of a button. The latter is an important accessory if we e.g. mounted the projectors on the ceiling, and it’s not easy to reach them by hand. With the provided radio frequency remote control, both filters fixed to the projector trays can be separately controlled. By keeping the button pressed the filter holders can be moved left and right to an arbitrary distance, but it’s a more convenient and accurate solution to send the filters out of the way and then similarly back by a short push of the button. In this case the filter will be returned to precisely the same position, where it was previously set, from where its movement was started. If the filter holder car is blocked while it’s moving (or for some reason it gets stuck on the rail), it immediately stops and reverses in the opposite direction by about 1 cm – similarly to the electric windows of motor vehicles if an obstruction is detected.